Steve and Gill have travelled down to St. David’s and back. Here is the account of their adventure.

We left here at 5.30 on Saturday morning, which meant that we were able to have breakfast at 8 am at the Corley services on the M6. From there, we drove on to meet with Ray and Elizabeth Hunter in Ledbury. They have agreed to pursue the project across the county of Herefordshire. They had invited another couple from near Bromyard, who are wanting to have something in their locality. We had a great time sharing our experiences and praying together. We also pointed out, that there are a number of redundant churches across that stretch, which are cared for by the Churches Conservation Trust, and might make suitable sites for way-stations.  Adam will be investigating the possibility of these over the next few months.

From there, we drove to Llangammarch Wells where we recently placed a way-station. There we stayed with Jerry and Paula Garry. Jerry took us over to Llanwyrtyd Wells, where we are hoping to place a stainless-steel sculpture on the end wall of ‘The Well’, which is a small Christian centre in the town. We had a very constructive time with David and Barbara, who head up the fellowship there. We discussed the rough draft of the design and prayed together. 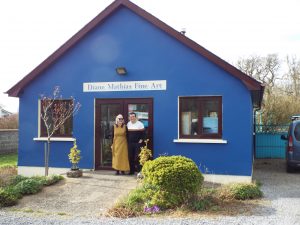 Diane’s Art Studio and a potential new location for a waystation.

The following morning, we headed off to the little village of Henllan near Newcastle Emlyn to meet Emyr and Diane Mathias. Emyr is a builder, but also a wonderfully passionate evangelist, who walks with a big cross over his shoulder. Diane is a landscape painter, and has a beautiful studio next to the house, which is open to the public. They have offered us a space at the side of the studio for a way-station. It is an ideal place for a number of reasons. There is a yard in front of the studio, which makes access to the way-station very easy for walkers and motorists alike.

We drove on from there to visit a couple up on the coast at Aberporth near Cardigan. Their names are Paul and Sue Clarke. Paul is a sculptor, who works in both wood and stone. Paul had contacted us, asking if he might be involved with the project. We were able to share our vision with them, and we felt that they really grasped what the Via Beata is all about. Paul had recently been challenged about using his sculptural work to share his faith. Shortly after that, he heard about the Via Beata project.

Paul is a very competent sculptor and works to a very high standard.

At noon on the Monday morning, we were due to meet with Janet, the pilgrimage and education officer at St. David’s Cathedral, and we were hoping to be joined by Dean Sarah, but the Lord had a better plan. There was a big military funeral taking place in the cathedral. Everything was closed to the public, and the security was tight. We were able to get into the refectory through the back door, and we met for lunch with Janet as planned, we had a great time sharing with her, and showing her the maquette of our proposal for an art-work in the cathedral, but the Dean didn’t appear. After lunch, we went to see a community garden in the cathedral grounds. Janet said, that if the worst came to the worst, we could place something there. However, we all felt in our hearts, that we should have this art-work in the cathedral itself. 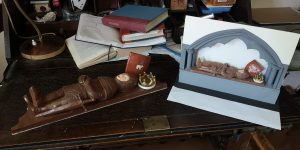 We left Janet, and then visited an elderly lady who we have got to know in St. David’s. Then we made our way back to Solva. There, I was making up my notes, when I suddenly had the thought, that we should have left the maquette with Janet, so she could show the Dean what we had in mind. I gave her a ring, and then drove back into St. David’s. Janet was standing at the door of the pilgrimage centre when I arrived.

“The Dean has just rung”, said Janet. “And she says that she would like to see you in the Deanery.”  I had to drive all-round the one-way system and into the other end of the cathedral grounds. I legged it to the Deanery and was shown into the Dean’s office. She was so welcoming. We had a wonderful time sharing and praying together. I really felt that we engaged at a heart-to-heart level. Seeing the maquette was such a help. She said that she had seen our drawings, but she hadn’t really got the picture of what we were driving at. Amazingly, there was a chapter meeting that evening, and she said that she would show the maquette to all the cathedral staff. 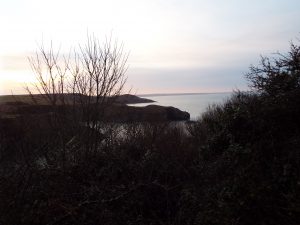 Back at Solva, Ian and Nadia showed us the field that they have bought, right next to them, and where they thought we might be able to place a bench, on the coastal path, overlooking the sea. As it was very wet that evening, we resolved to get out there early the next morning and have a closer look before we set off on our return journey. This we did and realised that it would be an ideal spot for walkers, before they set off on the last leg round the coast to St, David’s.

On Tuesday, we had just one call to make on our way back to Knightwick in Worcestershire, where we stayed a night at the Talbot Inn. This is where we have the bench with the Good Samaritan story carved on its back. The travelling was very slow, with lots of slow-moving vehicles and road-works. We visited Tom and Eva at Capel Dewi en-route for a cup of coffee. I was all prepared to give the bench way-station a spruce up, but found that they had already done it in honour of our visit.

On the Wednesday, we had two meetings in Northamptonshire. One in Brixworth, where had a lovely time with the folks in the Anglican church. They are all eager to have a way-station there, but we realise that we would need a faculty to site a way-station in the church-yard. There is also a lively community church in Brixworth. It would be great to involve them!

Finally, we met with Chris Gledhill who we have got to know from Wellingborough. The town is expanding rapidly towards the North and will extend right up to the neighbouring village of Great Harrowden. That’s where we met Chris at the church, which is soon to become their new venue. They would like to place the Via Beata way-station there, so it would become part of the proposed re-ordering of the church building. So, the bench will remain in our barn for a while longer, until things are completed, and their congregation can move in.