The way-station at Great Moulton in Norfolk was one of the earliest to be put in place. It stood in the grounds of the South Norfolk Guest House, which was then owned by Simon and Heather Moss. When the guest-house changed hands, a few years ago, the new owners asked us to relocate the way-station.

The route of the Via Beata trail goes through the churchyard of St. Michael and All Angels, where it joins the Tas valley Way. It is a well-used path. So it was a great joy for us to be given permission to place the way-station there, right on the path of the trail.

We are very grateful to Rev. John Madinda, Chris Wright, the church warden and members of the P.C.C. who have welcomed us so warmly.

Last Saturday, 13th March, we were able to put the way-station in its new position. We had a great team of strong helpers. The job was completed and everything was tidied up by 12.45 pm. Our thanks to Simon, Nathan and Jacek. 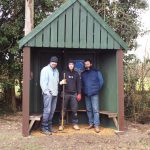 The way-station looks lovely in its new position, It’s a great spot. Looking out from the shelter of the way-station, there is a lovely view of the church and church-yard. 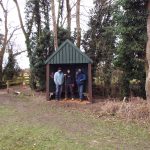 As we were working, lots of walkers came right past the front of the way-station, and we were able to share with them about the project, and also about its message.

The relief carved panel that the way-station carries, illustrates the parable that Jesus told about two builders. One who built on a foundation of rock, the other on sand. When storms arose, the house built on sand collapsed.

Jesus concluded that the person who hears His words and puts them into practice is like a builder who builds on a foundation of rock. When difficulties arise, that person is not shaken. (See Matthew 7 v 24-27)

Leave a Reply to Joy and Graham Brodier Cancel reply