Together with my walking companion Lorie Lain-Rogers and a local supporter, Christine Smith, we completed another section of the Via Beata at the beginning of April.   Starting in Hay on Wye, the first two days route-writing was easy as we decided to follow the Wye Valley Walk from there to Builth Wells, making two more stages.  It is a beautiful walk, often by the river, with little road work. 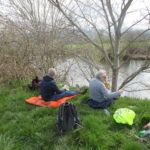 Lunch by the River Wye

On the second day, we stopped off for an ice cream at Erwood Station Gallery.  The reconditioned railway carriages house a contemporary art gallery.  Both the art displayed and the ice creams were well worth the stop.

Enjoying a breather at Erwood Station Gallery on day two

By a marvellous coincidence, the latest section of the Heart of Wales Line Trail had been opened the day before and covered the route for the third day of the exploration from Builth Wells to Llangammarch Wells.   This new route links up the stations of the Heart of Wales railway.  It was well signposted and a joy to walk. 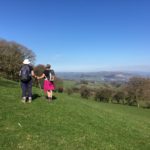 View on the way up to Mynydd Epynt

It passes safely through the north of the artillery range on.   From the top we were able to see as far as the Cambrian Mountains.

Day four started easily enough following quiet roads to Crychan Forest.  However, the path through the forest was difficult to find and when we did, it was wet and over shale.   It was a relief to reach the Roman road and follow it down to the village of Cyndhordy.   The next day’s trail was once again on quiet lanes, then after going through Cilycym, climbed up to Mynydd Mallaen.  Unfortunately, the way over was not clear so this section will be re-walked by local supporters over the next few weeks.

On the final day we walked from Caio to Rhydcymerau and were joined by Nick and Carolyn Down.  It was a lovely walk on quiet roads to start with then we turned onto a footpath up to Tan-y-lan and on into Brechfa Forest 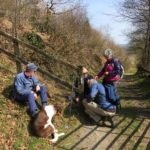 Waymarking on the way up to Brechfa Forest

coming out higher up at Gareg, then a bridle path down to the road again. We lunched at Llansawel in the churchyard.

After a short walk on the road out of the village, we turned off onto an ancient drover’s road which took us all the way to Rhydcymerau.

The finishing line is in sight. As the two sections from Crymych to Letterston were walked four years ago, there are only five days of walking left till we reach St David’s Head.   This is planned for the second week in June.   We really are nearly there!!   Biddy Collyer