New Waystation At Kirkley in Lowestoft 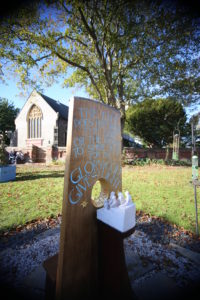 For some time, things seemed to have been at a standstill in Lowestoft so on the last day of 2017 we visited Lowestoft Community Church. We were given the opportunity to share something of the project with them and we asked them to pray. They must have some good pray-ers there, because on the 12th of January we were contacted by Eoin and Helen Buchanan from Kirkley asking if they could be involved with the project. They were in the process of turning their large rectory garden into a community space. We talked through the possibility of placing the sculpture based on the words from Revelation 21:23: “The city does not need the sun or the moon to shine on it, for the glory of God gives it light.”

By the end of October the sculpture was complete and we had the joy of a visit from Bishop Graham who led the commissioning service. It was a wonderful opportunity to speak about the heavenly city to the school children and local folk who were gathered. We thank God for Eoin and Helen and their warm hospitality. We pray that the heavenly light will touch the people of Lowestoft.