A couple of weeks ago, Lorie Lain-Rogers and I set off to find a route from Worcester Cathderal through to Hay-on-Wye, this time using a caravan.  This gave us more flexibility than using the motorhome as previously.

I had studied the long distance paths in this area and used three of them.  The Three Rivers Ride, the Three Choirs Way and the Wye Valley Walk.  The last two are available in printed form, and the first only online.

Over five days we travelled slowly west, either using a bus or taxi to reach our starting point, or by walking both ways.

Our first day took us to the village of Knightwick, by way of Lower Broadheath were Elgar was born.   The only difficult parts were the poor signage of the Three Choirs Way, and getting lost inside the Ankerdine Reserve.   The Talbot pub made a great final stop where I enjoyed their home-made lager and to which we returned for a meal that night. 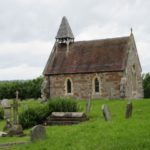 A taxi took us back the next morning, and still following the Three Choirs Way, we quickly found ourselves in a beautiful little wood, the path lined with foxgloves. 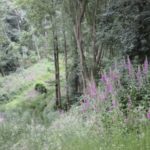 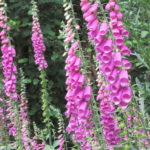 While eating lunch in a meadow a couple of hours later, we saw a fox sunning himself, and not too bothered by us sharing his domain.   All went well till we took a wrong turning at Hawkings Farm, veering north instead of west.   This took us a couple of hours out of our way.   By 8.00 pm we were shattered, lost again and rescued by a friendly farmer who took us back to our car.  Note to self.  Never walk without a compass!

Day three and we decided to retrace our steps and cover the paths we had missed.  Parking at the Three Horse Shoes pub in Crowarne we walked down the green lane we had missed the night before, then onto the church at Marden.  Situated on the River Lugg it proved a great stopping place with an accessible loo, well-stocked bookshop and kitchen.   It has been a pilgrimage site since the 8th century when King Offa’s wife had King Ethelbert beheaded.  Following which there were stories of miraculous healings.

When I planned the route, I mistakenly thought that the Three Rivers Ride would be on quiet roads suitable for walkers as well as horses.  Big mistake.  Some of the roads carried quite a lot of traffic so I quickly re-designed the route avoiding those sections.

Knowing that we had to drive the caravan through Hereford to our last site, we had a late lunch before hitching up and leaving for Castlefields pub and caravan site.

So far, the walking had been very easy so walking east over Merbach Hill the next morning was a bit of a challenge, but well worth it for the views across the River Wye.  Once we descended to Bredwardine, we discovered another interesting church where Rev. Francis Kilvert, who wrote three well known diaries in the 18th century, had been the vicar.  As there were no buses we had decided to walk east towards Byford, then retrace our steps.  However, a lovely woman we met in the church kindly offered to pick us up from there and drive us back to our site.  Not only did she do this, but she came with a goody bag of Herefordshire delights for our picnic the next day. 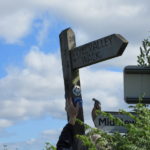 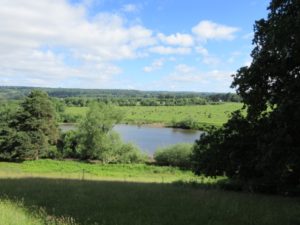 Views over the River Wye

This proved to be a delightful day, with views of the river, fields of sheep and cows.  By lunch time we were sitting on the waystation bench at the picnic spot. Just time for a quick ice-cream before we re-traced our steps, enjoying the sunshine and easy walking.

Over the five days exploration, we notched up four possible waystation locations, and have now reached Wales on our route west.