Once the trustees of the project had completed their deliberations on the Saturday morning, we were joined by some 30 supporters for a bread and soup lunch. 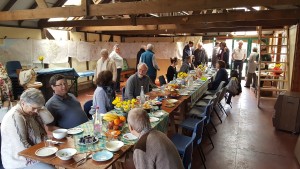 Table laid for a tasty lunch 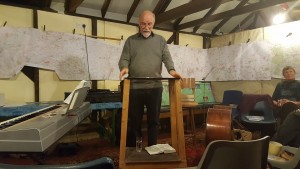 Phil Webb, the newly appointed Chaplain to the Via Beata

After this we heard the first of Phil Webb’s four talks on the theme of discipleship. We all found these talks inspiring and challenging. We are thrilled to be able to announce that Phil will be taking a slightly more formal role as chaplain to the project in the future.

Later in the afternoon we all enjoyed a walk along some of the remote lanes around Banham. This gave everyone a chance to catch up with one another, and also to pray for some of the places that we were due to visit on the Sunday. 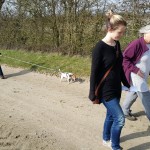 Enjoying the countryside around Banham in Spring sunshine 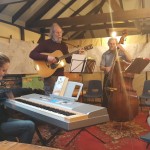 More than forty of us sat down for a wonderful supper prepared by Gill, Pat Menaul and others. This was a feast of delights. When supper was done, Dave Sturgess sang a beautiful song that he had written for us called ‘Via Beata, The Way of Blessing’. Steve then reported on the progress of the project over the past year since the Via Beata weekend 2015. It was encouraging to see how much has been achieved in that time. We are thankful for all the support that we have received in all kinds of ways. Above all we thank God for His faithfulness. 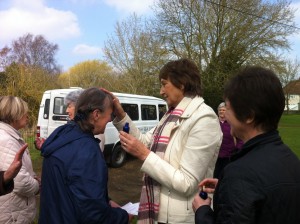 We set off early from Rowancroft on the Sunday morning, to join the folks at Bluntisham for their communion service at 9.30 am. We were joined by Shirley Bowers and a team from Arise Ministries in Huntingdon. They prayed for us all, and sent us out with a prayer of blessing to the sweet accompaniment of a robin singing his spring song from a nearby tree.

We were able to pray along the route of the Via Beata all the way back to Sedgefen on the other side of Ely, and especially at points where we were aware that violence and discord may have left its mark.

We thank God for the glorious weather, and for all His blessings that have made this weekend such an enjoyable and memorable one