Extending the Via Beata route westwards into the Midlands

On Saturday 13th February, I was joined by Nigel Sykes, to try out the planned route from the way station at Grace Fellowship in Little Stukeley to Little Gidding in Northamptonshire, an easy walk of around 9 miles. 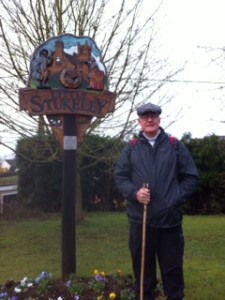 Nigel ready to set off from Little Stukeley

One of TS Elliot’s Four Quartets is named after the hamlet and there is a Christian retreat centre there at Ferrar House.  Little Gidding was the home of a small Anglican religious community established in 1626 by Nicholas Ferrar, two of his siblings and their extended families. It was founded around strict adherence to Christian worship in accordance the Book of Common Prayer and high church heritage of the Church of England. Charles I  visited Little Gidding three times. The community continued for 20 years after Ferrar’s death, until after the deaths of his brother and sister in 1657.

The weather was dull and overcast with rain threatening as we set off.   The route took us over the A14 (M) then alongside it until the footpath veered away through the villages of Alconbury and Alconbury Western and then north to Upton.   The only possible place for food we saw was the White Hart pub in the middle of these villages, but as we had hardly got started we pushed on.  There was very little road walking apart from two short stretches; one out of Little Stukeley and the other running north east of Upton.   Then we joined the Bullock Road bridleway just as the rain started.   Lunch was taken quickly at the edge of Aversley Wood, sitting directly into the wind and wet, but slightly sheltered by the trees.  Thankfully a memorial seat meant that we could at least sit down.   From there the rather boring but easy to follow Bullock Road continued till we turned off it towards Bottom Farm riding stables.   That horses were frequent users of the bridleway was obvious by the way the ground was well churned up.  Onto the road for only a few yards, until we turned down the track to Little Gidding.  By the end of the walk, it was obvious that we had finally left the flat lands of East Anglia for the gentle folding terrain of the Midlands.