A new route through Herefordshire 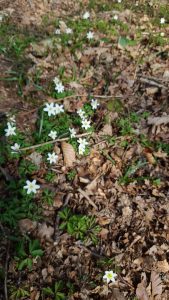 The straight line from Lowestoft and St David’s Head is easy to draw on a map, not so easy to find footpaths to match. This was why the original route through Herefordshire followed the Wye Valley Way for much of it. However, there was a dearth of way stations. None in fact. That is why when Sue and Mike Hawthorne said that their church in Eardisley would like to host one, we decided to re-route to take in that village.

It is fine to sit at home and hope that various footpaths will work, not so easy once again to be sure. We have found too many blocked, over-grown and impassible so when Guy Vowles offered us help by way of a guided tour of the trail that he made, we gladly accepted. The trail is called “The Wyche Way.” His route from Upper Maund through to Eardisley worked a treat, as did the path found by Sue and Mike Hawthorne from Eardisley to link up once again with the Wye Valley Way four miles east of Hay-on-Wye.

So Lorie Lain-Rogers and I set out recently to mark it. We met Guy at the England’s Gate pub in Bodenham and walked the first section. Only just over a couple of miles away, we managed there and back on a sunny afternoon in late March. The next day, we walked from Bodenham to Weobley, having been dropped off at the start by Ray Hunter, another Via Beata supporter.

It was a delightful walk through open countryside to Dinmore Wood where the ground was covered in wood anemones and violets, both purple and white. 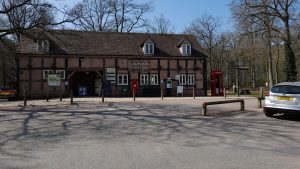 Welcome place for some refreshment.

We then walked down to the Queen’s Country Park where there is a shop, cafe and ice-cream!!

We reached Weobley by late afternoon, having taken a wrong turn. During our time in Weobley, we stayed at Mellington House, a very comfortable B & B, where Alison and Chris were our hosts. Highly recommended! 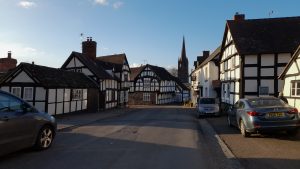 The attractive village of Weobley where we stayed

Sunday we met up again with Guy, once we had walked from Weobley through to Logeston. It was a short walk then to Eardisley. This is another black and white village, like Weobley and it boasts the most amazing shop which houses the Post Office, Cafe and 30,000 books. Readers, I bought one. We re-traced our steps in the afternoon to Logeston and Guy drove us back to Weobley.

On our last day, we drove on to Eardisley and Sue showed us the church and where the new way station will be located in the porch. This church boasts a 12th century font, beautifully carved, well-preserved and still in use. The cover was off because a baptism had taken place that Sunday. 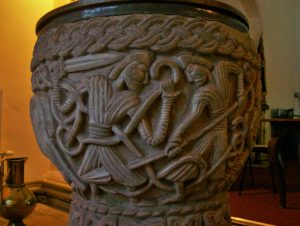 Some of the relief carving on the medieval font

Our route in the morning went across woodland, through three gardens and then down the hill to the toll bridge at Whitney. 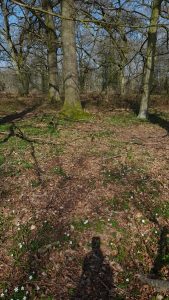 Once across the bridge, after a picnic by the river, it was a straightforward walk through farmland to link us with the Wye Valley Way. We then had to turn round and retrace our steps, never easy; I prefer to go forward.

In the evening, we were hosted in Ledbury by Ray and Elizabeth Hunter in their beautiful home. They are on the look-out for new places for Way stations in Herefordshire. One possibility is in the deconsecrated church at Stoke Lacy. We will need one or two more places, but altogether a very positive repositioning of the route. We plan to go back in June and take off the way markers on the previous route. The new route will not be available until this is done.