Cherries, plums and a peregrine!!

Lorie and I had set four days aside with the expectation of waymarking from St Ives through to Watford in Northamptonshire. As usual, my expectation of what we could achieve was outweighed by the reality. We reached Raunds! Way short of Watford. The incessant rain didn’t help either, turning the footpaths across the fields into muddy tracks, and clogging up our boots so that they weighed twice as much.

However, the time was well worth it for lessons learnt. In some areas we were able to use the car to waymark each end of a long section, but mostly we found that the best way was to re-walk each section, not least because in some sections, the footpaths were hard to find because of the amount of summer growth.

The highlights were our connections with people and especially a couple of angels!!  The first of these was the woman who put us onto the right path near Upton. The field across which we were walking had recently been cut, leaving no sign of the path. We knew we were wildly off-track so we went back to the beginning of that section. While Lorie was putting up a waymarker, along came a woman walking her dog. She kindly said she would walk with us to show us the route. We are now confident that it works and is clearly way marked. 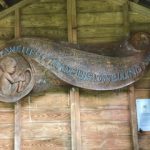 Close up of sculpture at Burleigh Hill Farm

A possible new route we were trialling to Finedon had been clear from the village of Little Addington. The path was wide and easy to follow. Suddenly, it all changed. The path was overgrown and we had to fight our way through head-high wildflowers and thistles. We traced our way back to where the footpath should have ended, at the edge of Finedon. It was no easier from that end. Along came our second angel, the man we met as we walked back to the car. He lived closeby and apparently the path used to be kept open, but with a change of ownership came a change of attitude. I am afraid that this is a national problem. Some farmers are happy to look after the paths that cross their land, but others are less helpful. This is why, wherever possible, the Via Beata follows bridleways, long distance paths and byways which are much more likely to be open.

Little Gidding garden, beautiful setting for the way station there

Despite the rain, we were rewarded by the beauty of nature as we walked. In St Ives, the road was lined with cherry and plum trees, which we gathered and ate as we walked. The overgrown paths were full of butterflies and bees. An even more unexpected joy was the sighting of a peregrine. We had taken a wrong turning which took us to this particular church and there it was surveying the scene around it from its vantage point on the tower. 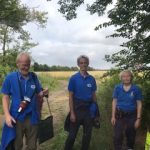 Tom and Andy, members of Through Faith Mission with Lorie near Great Stukeley

The other highlight was meeting with the team from Through Faith Mission in Kings Repton. This was a true God encounter. We knew we were all in the same area but hadn’t yet made a connection. As we walked down past the church there, we literally bumped into Georgina, George, Tom and Andy just outside the house they were to stay in that night. Their hostess kindly offered us a drink and we had time to catch up. We then met up with Tom and Andy the following morning near Great Stukeley.

Georgina encouraged us by saying that wherever she had seen a waymarker, it really helped them to know they were in the right place, and this is what we hope will happen for all those people who set out to walk, run or cycle along the Via Beata in the future.