(Editor’s note: John and Paul raised £6,700 to date for the national charity Emmaus which has 29 centres across the UK, including one in Ditchingham, Suffolk)

“The two of us – John Pinnington and I – cycled around 470 miles, stopping at some of the Via Beata way stations on the way.  The trip was John’s project – he is involved with Emmaus and Sustrans – who developed maps for the route which we partially followed.

‘This was a unique experience for both John and me: I had never done a multi-day ride, whilst although John had cycled from Land’s End to John o’ Groats a couple of years ago, our effort was both unsupported, involved navigation from the start and including stretches of trail riding. While each day had special moments here are just a few: 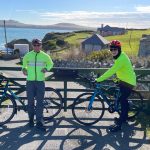 The start from St David’s included more than 5,000 ft of climbing over 62 miles with pretty much constant heavy rain and temperatures barely reaching double figures. On a downhill run into Cilgerran both John and I started shaking uncontrollably with the cold and so we stopped at a post office in the village where we were greeted by an angel, who gave us coffee, warmed us and helped us dry off (a bit). Unbelievably she also made a donation to Emmaus before we left. The ride through Cwm Gwaun was absolutely stunning – even in the pouring rain.

At Penrhiw farm we were provided with a lovely warm room, 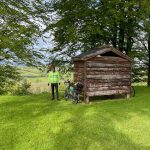 a long soak in a bath, wonderful food and tumble drier to boot! Our hosts couldn’t have been more welcoming.

Monday 24th May We decided to modify the route to avoid a trail by the Claerwen reservoir which we suspected may be treacherous after one of the wettest May day’s in Wales ever! 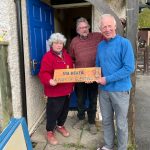 Paula and Jerry with John at Llangammarch Wells

Again our hosts at Llangammarch Wells were extraordinarily generous: we spent a memorable evening joining them in a marvellous family meal – followed by a night in a ‘pod’, which was as cosy as it sounds!

Tuesday 25th May We followed the Wye Valley for much of the day, stopping at Hay-on-Wye for lunch at a way station. Bench at Hay on WyeThe weather was on our side and the Wye valley and Hay were both beautiful. 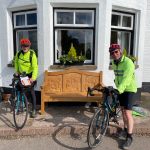 Paul and John outside the Talbot Inn, Knightwick

The Talbot Inn at Knightwick proved to be a delight in many ways: the way station –  a beautifully carved bench – had been delivered by Steve the previous day; the setting next to the river Teme was lovely (although the hotel was only slowly recovering from having been flooded by said river in 2020); the owner was a very interesting woman and the food was as good as it gets (highly recommended for anyone travelling near Worcester on the A44)

Wednesday 26th May  We crossed the Severn, the M5 and Avon at Strensham in quick succession. The latter was particularly memorable as we had to cross a weir and a lock via a little-used path.

The giant cross at Redhill

The Redhill Centre is set in acres of green and pleasant land, whilst the way station is a giant cross overlooking all of this.

Thursday 27th May An extraordinary day which involved getting lost in Royal Leamington Spa, avoiding Daventry, but finding Ashby St Ledgers – a medieval village having associations with Guy Fawkes, but unfortunately no way station! This was followed by more than 20 miles of cycling along the Grand Union Canal tow path, which is not designed for cycling and included numerous locks, bridges and mud patches. 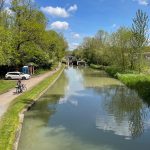 All of this slowed us down significantly so that we gave up reaching our destination at Little Gidding and we found ourselves entering Wellingborough at 10.30pm. As luck would have it we got rooms in the first hotel we tried (the Columbia) which proved to be comfortable and welcoming.

Friday 28th May With more than 100 miles to reach Banham this was never going to be an easy day: it started well with a beautiful ride through the Stanwick lakes near Irthlingborough, but then we got lost in Huntingdon! However St Ives and the way station at Bluntisham were a delight, although the roads and the drivers thereon started to deteriorate after that. Ely was lovely, but Prickwillow less so. The rain had caught us and there were what appeared to be endless level crossings, including one that caught my front wheel and threw me off the bike only seconds before a train came through. Fortunately with John’s help I got out of the way with only minor damage to myself and the bike! We ran out of time and with failing light and cycle lamps we entered Thetford forest. However the track soon turned to mud and we phoned Steve Eggleton who immediately jumped in his car to rescue us…

Saturday 29th May This was scheduled to be a much shorter day and should have been more relaxing, however we had committed to an unrealistic time for reaching Emmaus – which we missed by 2 hours, but we had a lovely greeting from them nevertheless and thence to the South Pier at Lowestoft, which could not have been a greater contrast to St Justinian’s… 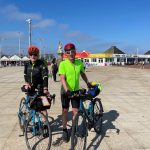 We found John’s wife who greeted us with a much needed picnic.’

(Editor’s note: John and Paul raised £6,700 for the national charity Emmaus which has 29 centres across the UK, including one in Ditchingham, Suffolk)