Walking, running and cycling the Via Beata 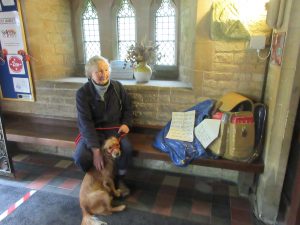 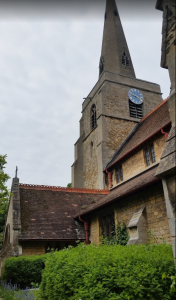 Thank goodness that last year we finished the draft route for the Via Beata through to St David’s Head. The plan had been that this year we would go back over the parts of the route from Brandon to Wellingborough that had not yet been waymarked.   Covid-19 put paid to our plans until September when we were able to restart.

On a fine Sunday, I did the first planned section from Hiss Farm, Hockwold through Sedgefen and up to the Shipea Hill station junction on the A1101, near Redmere in Cambridgeshire.
Then together with Lorie Lain-Rogers, waymarked from the other side of Engine Farm, at Larks End east of Ely through to where the Via Beata crosses the A10, just west of Ely.
We had our picnic lunch in the churchyard of  St James at Stretham where we were able to visit the new way station in the church porch.

The words depicted on the back pack are from John 3:16 “For God loved the world so much that he gave his only Son…”

It was good to be out walking the Via Beata once more. Sadly, we have had to stop again as I am now back living in Hackney helping with childcare for my daughter during lockdown number 2.

However, the problems caused by Covid 19 hasn’t stopped us moving forward on other fronts. The bench that will sit outside the Talbot Arms in Knightwick has been finished and will be put in place when the pub reopens, after refurbishment, hopefully next spring. 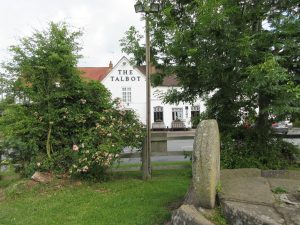 This beautiful bench depicts the story of the Good Samaritan and has the words from Corinthians 13 carved on the seat rails. At the top, over the carving, are the words “Love never fails.”  Steve and his team have also been busy with a sculpture for Llangamarch Wells near Builth Wells in Wales. Others are in the planning stage.

In the meantime, as a result of people seeing the waymarks across the England and Wales, new links are being made with walkers who want to be involved with looking after the route and in helping to keep it open.

One group, Through Faith Mission, are planning to walk from both directions next spring, meeting up at Red Hill Christian Centre, which is about the midway point marked by 10 foot high cross. 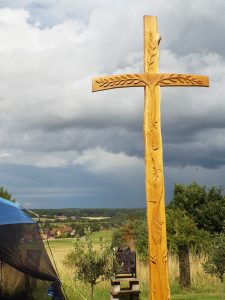 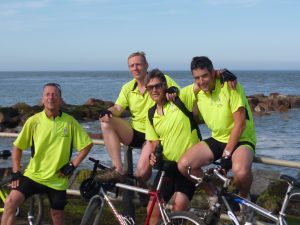 but next year, Dr Kevin Burgess is aiming to run all the way from Lowestoft to St David’s Head.

This is how Kevin describes himself:

“I’m Dr Kevin Burgess, GP working with the Forces. I spent 18 years in the Army before settling in Norfolk. I spend my spare time running and training for triathlons and am married with 3 grown up children and 3 grandchildren.

I first came across one of the little blue discs with Via Beata on a post whilst running with my friend Janice in the Tas Valley. I went home looked up the route and realised that the route ran through Llangammarch Wells which is a beautiful little village where we had a family home for 40 years, and that coupled with a friend in St David’s felt like it was a route I just had to do.

Seeing as I’m 50 next year I was looking for something special to do.

Being a runner I decided I’d like to run it and plan to do so in May next year.”

Kevin has started trying out the route already, and a month ago ran from Lowestoft to Wacton, with more trial runs planned.  We will update his progress in future posts.

So, though finishing the waymarking is on hold for the time being, great plans are ahead for next year, including the commissioning of the steel sculpture marking the beginning of the route at South Pier, Lowestoft.