Via Beata has not been hampered by Covid restrictions! 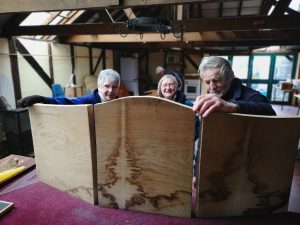 Although much of the world has been held back by the Covid restrictions during these past few months, The Via Beata project has continued to forge ahead.

Firstly, the large stainless steel sculpture for the South Pier at Lowestoft is complete. Paul Pibworth, the sculptor has been able to get on with this. He has made a beautiful job of it, and we have now stored it under wraps until we will be able to fix it in place on the pier, and organise a good public event to commission it.
We have been able to make a maquette of the proposed art work for the Letterston way-station in West Wales, and also one for the proposed art-work for the Cathedral at St. David’s.

One of the useful discoveries that we have made over this time, is that you don’t have to drive all the way over to Wales to explore a possible site for a way-station. 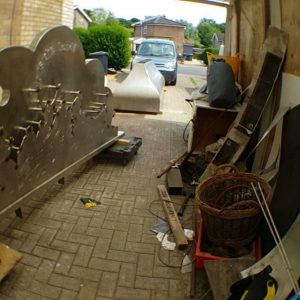 We were contacted by Jerry and Paula Gary, who have a campsite on the trail at Llangammarch Wells, near Builth Wells. They were offering their place as a possible site for a way-station. We were able to have a good look round using video, and come to a decision about the best location for the art-work. We were also able to agree a design between us, so now the fun begins! They will prepare the site. We hope that some of the work on the carving will be done together with folk from the Welsh end, and some by the team here in Norfolk. That is an exciting prospect.

Just before lock-down, the team here completed all the component parts for a carved bench, which is due to be placed outside the Talbot Inn in Knightwick, Worcestershire. Now that things have eased a bit, Joram Bannister, who made the structure of the bench, will be able to get it all together so that we can fix it in position. 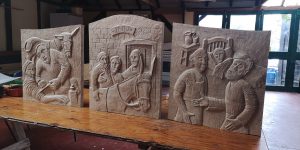 The panels of the Knightswick bench

Finally, as a team, we have been doing some research and development work on casting some glass thorns, which will be part of a large crown of thorns sculpture for the trail. We have made some prototype patterns, and now the moulds for these are ready to be fired, prior to casting the glass.

This is a really exciting project. There are many aspects of this piece that are new to us all.

We thank God for his faithfulness as we pursue this vision of a complete trail of art-works across the U.K. and for the support and generosity of so many dear friends.