Massive cross to be carved

Steve Eggleton and his team started work last Thursday 19th January on what will probably be the biggest Via Beata sculpture across the whole of the trail.   It is to be a massive oak cross and will be placed on high ground at the Red Hill Centre at Snitterfield near Stratford upon Avon which marks the half-way point of the trail. 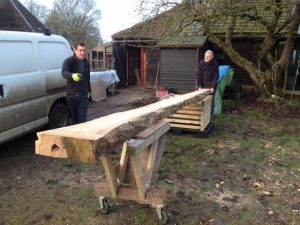 The upright arrives at Rowancroft

The cross will carry a relief carving of a grafted olive tree and the words from Hosea’s prophecy, which are quoted by Paul in his letter to the Romans “I will say to those called ‘Not my people’ YOU ARE MY PEOPLE and they will say YOU ARE MY GOD.”

The cross is brought into the barn

First of all, Steve had to find a suitable tree from which to cut the upright of the cross.  Once found, he didn’t know if it would be suitable until it was sawn at the timber merchants.  It was.  The next job was to get it back to Rowancroft and installed in the barn in such a way that it could be moved to one side for their Friday children’s club and for another mother and toddler group that is now using the barn on Wednesday mornings.