Steve and Gill Eggleton have recently returned from an action packed visit to Wales taking the project forward on several fronts.

They started with an exploration of the area around Weobley, which is the natural place for the next way-station to the east of Hay-on Wye.  The bench at Hay has recently been coloured to make it stand out better. 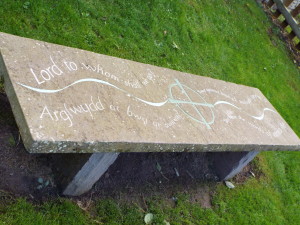 Meeting the Council at St David’s

On the Tuesday morning they met with the Refreshing North Pembrokeshire initiative in Fishguard. There were a number of people at the meeting from different agencies with an interest in the Via Beata project. They were able to explain the whole project to the meeting and the various agencies represented were keen to support.  The next morning they met with the clerk of the St David’s council to talk about the proposals.  The council have asked for one or two more designs, so that they can make a choice.

Later that day they had lunch with Pat and Richard Rogers from Letterston, where they were able to discuss and pray over plans to establish a way-station there. They are keen to involve local people in the making process as has been done at Bluntisham.

After that, they met with Don MacGregor at Llanrian. The church there are also eager to be part of the trail, and the location is such that it would make a wonderful last stop before St. David’s.

Returning eastwards to the way-station at Capel Dewi near Llandysul, which is now complete and standing proudly overlooking the magnificent Teifi valley.   It was built by Graeme and Ian from Solva with timber supplied by Tom and Eva who own the farm where it stands. Ian and Graeme have made such a beautiful job of the building with a slate roof rather than the corrugated tin that Steve had put on the drawing. 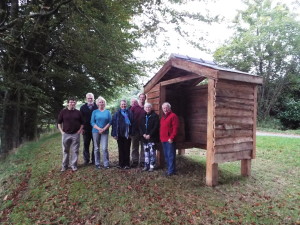 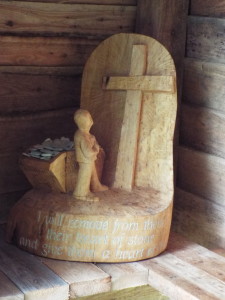 Wooden sculpture depicting the stony hearts left at the cross.

It carries the ‘stony hearts’ sculpture which was made at Kingstock in 2014. Everyone gathered round the new way-station to pray the Lord’s blessing upon it.